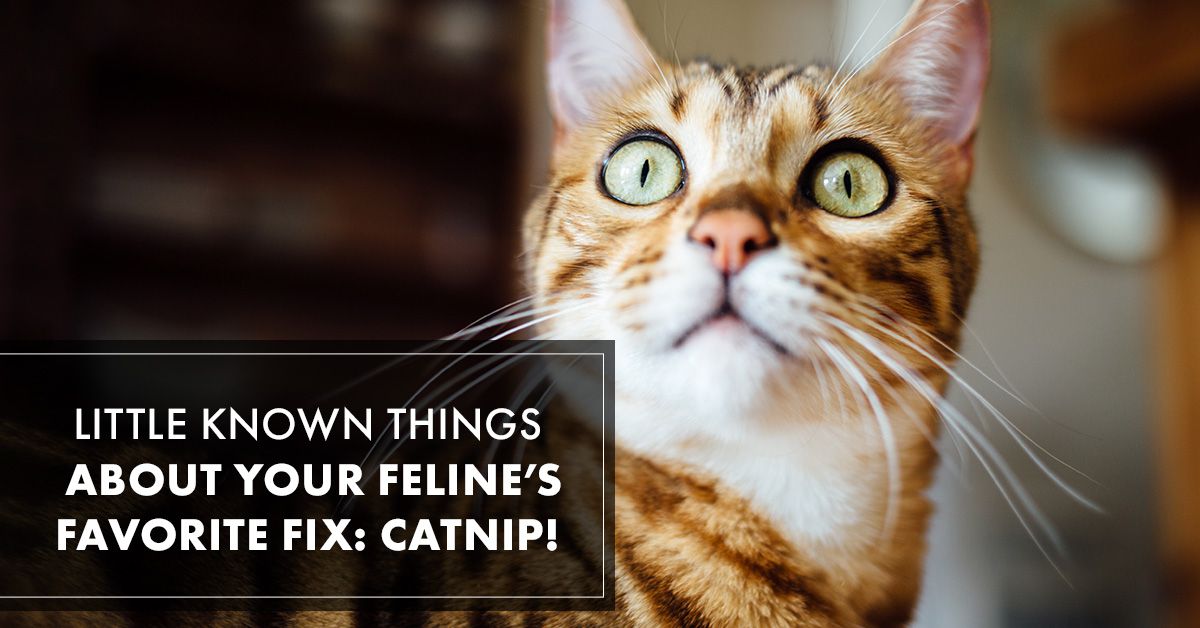 Cats love it. Humans are wildly amused by it. We provide cats with it to encourage play and indoor exercise. If anything, cat owners often give their feline some catnip if only for the sole purpose of some mid-afternoon entertainment. Could we blame them? Of course not; watching your cat dart back and forth across the room going 65 miles per hour is amusing, to be sure.

About Catnip: Something You’ll Find At Our Veterinary Clinic and Pet Market

Now, with this common understanding of catnip, it’s easy to label it as a “kitty drug” and move on. Our aim isn’t to uncover some deeper, hidden meaning behind Nepeta cataria, but there are some interesting aspects to this plant that are worth noting. The next time you swing by our pet market and veterinary center in St. Petersburg and the greater Tampa Bay area, maybe purchasing catnip will be more of a meaningful experience. Then again, maybe we’re just overly sentimental and it’s just fun to read about catnip — it’s your call, really.

In any case, let’s dig in and learn some more about this 100 percent legal, cat-friendly drug. Feel free to learn more about our veterinary centers in Tampa Bay by finding a location near you!

What Is Catnip, Exactly?

Above, our veterinarians mentioned that catnip is Nepeta cataria. This is a perennial herb, a member of the mint family that can actually grow to be roughly three feet high. Nepeta cataria contains a psychoactive chemical known as nepetalactone, and that’s the agent that’s responsible for causing a (generally pleasant) reaction from your cat upon exposure.

The effects of catnip can vary based on a number of factors such as your cat’s particular breed, but what’s interesting is that effects also vary depending on whether or not the catnip was sniffed or ingested. Really — when your cat eats catnip, it actually acts as a mild sedative, but when your cat smells it, the catnip functions as a stimulant.

The stimulant-like effect is understood to be psychedelic in nature, similar to that of marijuana or the hallucinogen LSD. We’re not sure how that was determined, but according to PetMD, the effects of smelling catnip last around ten minutes before they begin to wear off. It’s surmised that nepetalactone mimics feline pheromones and triggers the excitatory response in cats.

So, while the commonly understood stimulant effect of catnip means that it’s used to rile your cat up, what many people don’t know is that it can be intentionally used to calm your cat down. It’s true!

Now, as we mentioned, ingesting catnip is what creates more of a relaxing, sedative-like effect. If you can work catnip into a treat, this is a great way to calm your cat during a stressful situation such as a road trip or socializing them with a new dog in the house.

Bonus: Catnip is also frequently used to encourage the use of scratching posts. We’re sure that your furniture supports this use of cat’s plant.

Why Does My Cat Roll Around In It?

That’s probably because a) they’re enjoying it and b) more importantly, they’re doing so in order to bruise the leaves and stems of the plant, thereby releasing more nepetalactone.

Catnip Is Not Universally Effective

As much as many cats seem to love the stuff, it doesn’t work for every cat. Indeed, according to PetMD yet again, roughly half of cats are affected by catnip and the other half don’t seem to respond to it. From a scientific perspective, catnip sensitivity is difficult to quantify because individual behavior among cats can vary greatly; veterinarians believe that sensitivity to this mint herb is an inherited trait.

If you’re worried that your cat is going to experience the same fate as a 27-year-old rock star, don’t worry — there’s no overdose potential for catnip. We encourage you to use catnip freely, but you should know two things before busting it out:

If cats eat (not sniff) too much catnip, it may upset their stomachs and result in vomit and/or diarrhea. Hopefully they make it to the litter box! Don’t worry though, because your cat will return to normal after several hours of no catnip.
Your cat may no longer respond to catnip after repeated exposure to it. Think of this as similar to developing a tolerance to it; simply keep things in moderation (as with most things in life!) and your cat should respond just fine each time you bring out this playful treat.

A kitten turning seven months old is roughly the equivalent of a human turning 21 years old. Ok, maybe that’s not what we’d call “equivalent,” but your kitten isn’t going to respond to catnip whatsoever if they’re six months of age or younger. Again, some cats won’t react to catnip as a whole for their entire lives, so don’t be too disappointed if your of-age kitten doesn’t react excitedly.

Humans Use Catnip, Too

Historically-speaking, humans have used Nepeta cataria in various teas, herbal cigarettes, and as a cooking herb. Why let cats hog all the good stuff, anyway?

Visit Our Veterinarians In St. Petersburg With Any Catnip Questions

Of course, catnip is just one minor, borderline trivial aspect of your cat’s overall health. Our point: Royal Pets Market & Resort is always here to accommodate your pet’s needs and health. We’ll see you soon!